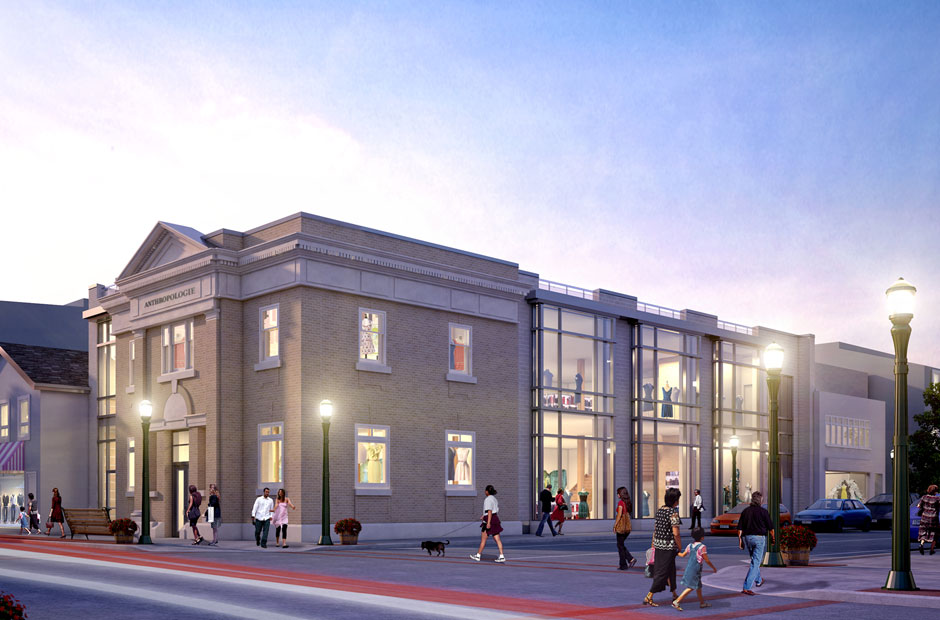 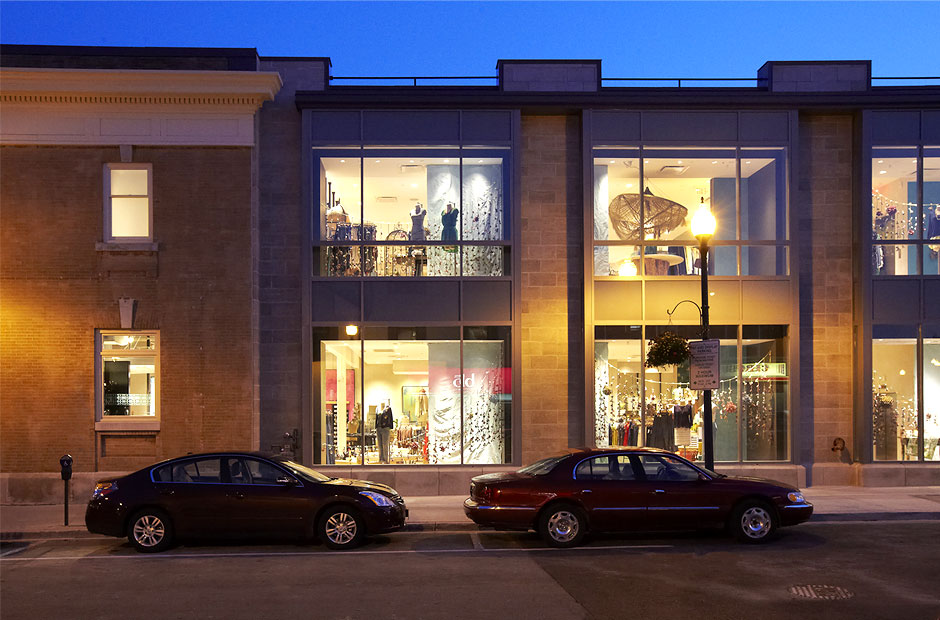 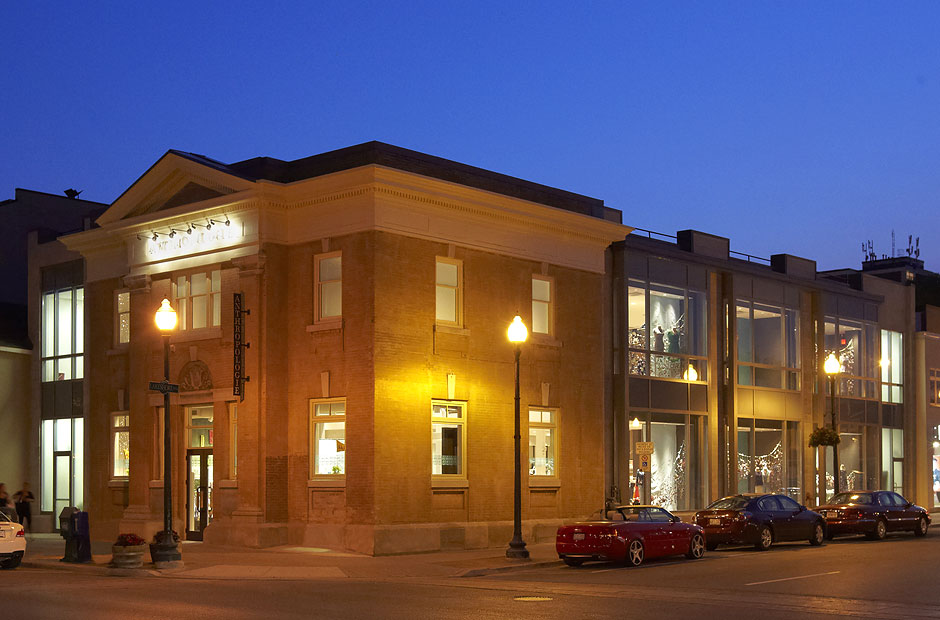 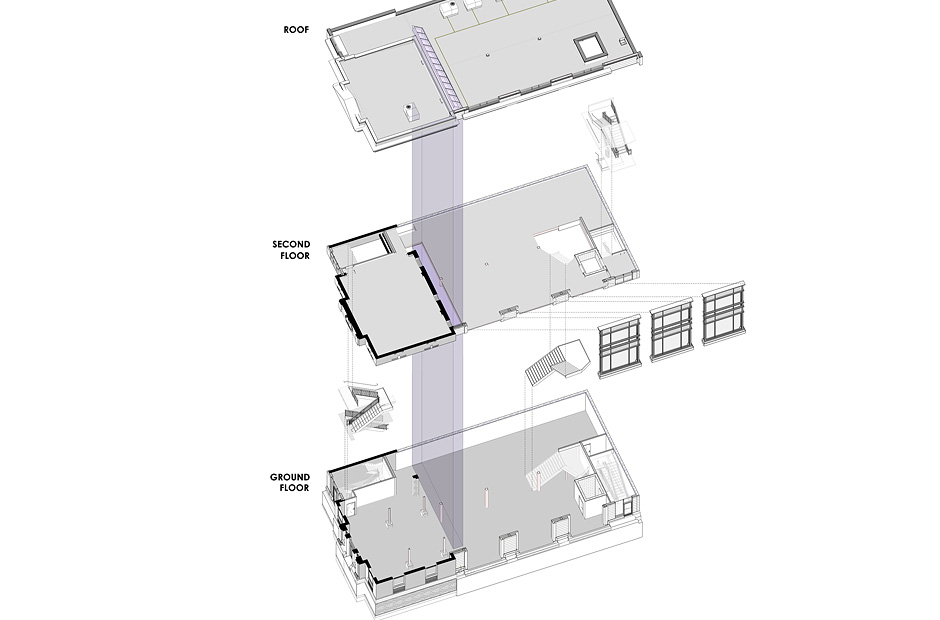 ATA completed the restoration/renovation and addition to the historic BMO building located at 159 Lakeshore Road East in Oakville. Originally known as the Merchants Bank of Canada built in 1910, this heritage building later became known as the Bank of Montreal Building. The building is located on a visually prominent corner of Lakeshore Road and Thomas Street and has important contextual significance to the downtown streetscape.

The Town wished to see the original façade restored and an addition that would be sympathetic to the heritage building. The client wished to expand the building with an addition that would meet the spatial requirements of the future tenant, a design/fashion retailer requiring 10,000 sq.ft. The goal for ATA was to restore the original heritage portion of the building and create an addition sympathetic to the proportions and rhythms of the heritage building while simultaneously meeting the spatial needs.

The existing bank building had undergone three renovations during its history and expanded over time with small additions on Lakeshore Road and Thomas Street. The bank building design was stately, symmetrical and solid masonry. The glazed openings were minimized creating a challenge for future tenants’ request for more storefront glazing. Detailing that had been hidden or damaged during previous renovations, such as the original windows, the entablature and pediment, were restored and care was taken to use matching materials and methods when repairing damaged stone or brick components.

The design approach taken for the addition was a contemporary one of sympathetic massing, rhythm and respect of the underlying order rather than attempting to replicate the historic building and in this way assuring that the original building retain its historic integrity independent of the new addition.

Original horizontal datum lines were carried across to the new addition to influence the height of the building, roof canopies, cornice lines and horizontal window mullions and bases. The appearance of the new elevations was derived from a response and interplay of rhythms found on the existing heritage façades. ATA’s approach to divide the bays vertically along the streetscape also provided the potential for rental flexibility in future for a system of smaller storefront shops.

Elements of the original design that were hidden or damaged during previous renovations such as the original windows, the pediment and cornice were uncovered and restored according to historic photographs. Wood windows, wood doors, limestone bases and reclaimed brick were used to fill in elements of the exterior wall that had been removed in past alterations. Paint samples were scraped from the original woods and used for colour matching to the original cream colour giving new life to the previously darkened façade.

The historic bank building had to be braced, stabilized, and reinforced while the demolition and construction took place due to earlier renovations in which portions of the interior bank piers and walls were carved away or removed. The concrete bank vault was carefully removed to avoid damaging the existing and adjacent building. An underground stream directly under the basement posed a significant challenge so a specially designed drainage system was constructed.

The project was consistent with the designating by-law in that it retained and restored to the original much of its two prominent original façades in form, scale, and detailing.  The “temple like” frontal pilasters, deep molded entablature and pediment, the two street front buff brick façades, the Coat of Arms of the Merchants Bank over the main entrance, recessed and raised brick detailing, window openings with stone sills and key stones and the main entrance with window lights at either side were retained, and restored as best as possible to the historic photographs available.

The restoration/renovation and addition gained considerable positive attention in the community. It addressed both the advocates of heritage conservation and proponents of progressive contemporary architecture reflective of the vitality of the present day Downtown by creating an effective balance between the two. In the 2012 Downtown Oakville Heritage Conservation District Study commissioned by the Town of Oakville, the project is referenced as making a positive contribution to the Downtown and as an example of how to integrate heritage within the new development and intensification pressures.  “….  This successful alteration conserves the original façades and adapts the building for on-going twenty-first century uses…..”

ATA met with the municipal Heritage Manager and a Heritage Oakville task group to present several design approaches and obtain feedback prior to making a formal presentation to the Heritage Oakville Committee.  The design was endorsed, and recommendation went to Council for approval. The design was favourably received and moved quickly through municipal approvals processes. The challenge was in obtaining support and approvals from two adjacent property owners. Issues at hand were that the rear lot area was being used as a communal parking lot, and that over time, ducts and services were added encroaching on the BMO property line. Since it was open space, windows of adjacent properties overlooked the parking lot and the lot itself served as drainage for the adjacent property owners. On behalf of the client, ATA became the negotiator for the scope of work required to the adjacent properties and to arrive at a mutually satisfactory agreement. The Client funded a number of upgrades to make way for the new construction. To make this project a success ATA worked extensively with the Oakville Heritage Committee, neighbours and other groups to acquire the necessary approvals for a favourable delivery.